qualifying display at the British Grand Prix. The Finnish McLaren driver was half a second faster than Red Bull’s Mark Webber who will start second behind Kovalainen. This is Red Bull’s first ever front row grid position. The front runners will have the Ferrari of world champion Kimi Raikkonen and also McLaren Lewis Hamilton breathing down their neck from third and fourth on the grid respectivley. Webber’s second place grid position has taken every one by surprise, even the Australian himself. BMW Sauber’s Nick Heidfeld and Renault’s Fernando Alonso will start from 5th and 6th positions 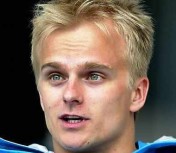 respectively followed by fellow Renault driver Nelson Piquet Jr. Pretty good qualifying for Renault in the changing track conditions. They will be looking for a strong finish. Heidfeld seems to be back in his old self running for a string 5th place grid position. Good to see Toro Rosso’s Sebastian Vettel starting along side Nelson in the 4th row. He will be starting 8th ahead of Ferrari’s Felipe Massa. Massa looked good during the practice but in the qualifying suffered a problem with the right rear wheel nut on his Ferrari during his final tyre change, and never made it out for his second run. BMW’s Kubica will be starting alongside Massa in the 10th position. Disappointing qualifying for Toyota’s Jarno Trulli, after his podium finish in the last race. As usual Force India’s drivers Adrain Sutil and Fisichella will be starting at the end of the grid. They were atleast somewhat close to Honda’s, thats something to cheer about for Mallya 😉

McLaren had the pace to get both cars on to the front row, but first and fourth places still make them

statistically the team that starts with the strongest chances. Kovalainen will be looking for his maiden victory. Can Kimi repeat his last year performance? How best are Ferrari going to perform to maintain their constructors lead? Kubica will have to push harder to get ahead. It will be an exciting race. Will Webber be able to maintain the lead with Hamilton and Kimi right behind him. Loads of stuff waiting to happen 🙂

This site uses Akismet to reduce spam. Learn how your comment data is processed.